Leones Anahuac among the top 5 best institutions at Conadeip

After a year of discipline, commitment, sweat, and hard training, our Leones Anahuac from both north and south campuses obtained the second and fifth places respectively at the CONADEIP.

In the framework of the Ordinary National Congress of the National Sports Commission for Private Institutions (CONADEIP), the institutions with the greatest scores in the competitive stage between August 2018 and May 2019 were recognized. Both, north and south Universidad Anahuac Mexico campuses were consolidated among the top 5 best universities.

This ranking is based on the sum of all points in each sport for each institution during the National Championships in the different specialties.

After finishing the 2018-2019 competitive season, our representative teams placed us among the best private institutions in the university sports. 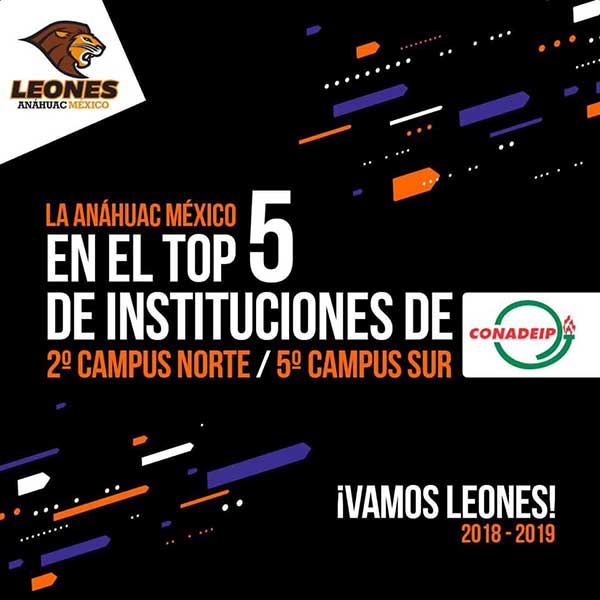 “This project has been consolidated with the support of the south campus Sports Coordination. We looked for the means for our University to be number one in the first tier of CONADEIP in five-a-side football. Nevertheless, this has been a work that started long time ago” mentioned the coach Jorge Uribe.

According with the south campus coach, the team usually takes part in the national competitions, although they did not get the championship, “until there was a group of bold youngsters who were not afraid of anything, who did not measure the consequences of winning over great universities. We had a great team, a great family with values and principles, who made their best to reach their goal: become National Champions of CONADEIP” he added.

For this university, the development of our students and their comprehensive instruction is essential. They get this instruction through discipline, values, experiences that they obtain thanks to areas such as sports, arts, social commitment, and spiritual life.

Our Tae Kwon Do coach, Juan Álvarez, shared his experience after being ranked among the best teams in the national competitions, and taken into account to be trainer of the national team that will be competing at the World Universiade in Naples, Italy from July 03rd to 14th this year.

“One of the best things that could happen to a country, to a university, a sportsperson, and a trainer, is to be part of the greatest events nationwide. These competitions let you have a place in Central American and Pan American competitions, as well as the World Universiade. But then, it is not just attending those events, but the chance that the athletes from your own institution can win a medal for their country”, he mentioned.

In an interview, Juan Álvarez recognized that “it is a great privilege that our Universidad Anahuac Mexico was the institution with more medals for our country in the last World Universiade in Taipei 2017, as well as in the Central American Games in Barranquilla 2018. The challenge now is the World Universiade in Naples 2019, and the Pan American Games in Lima 2019. This is a greater challenge to bring more medals and with better results, and this is why we working for every day.”

Having the chance to represent the country with the national Tae Kwon Do team makes our coach fills with joy and motivation, as a contribution to the National University Team.

Congratulations to all the teams, coaches, coordinators, and authorities in both campuses for continuously consolidating the Anahuac as a reference institution in Mexican sports.

Anahuac Cultural Center of the State of Mexico: the new cultural venue in Mexico

The Anáhuac: among the three best universities in Mexico, Ranking QS 2020

Rewarding the effort and academic quality of our students

The Anahuac and the CNDH bolster the UN Sustainable Development Goals

Anahuac Cultural Center of the State of Mexico: the new cultural venue in Mexico

The Anáhuac: among the three best universities in Mexico, Ranking QS 2020

Rewarding the effort and academic quality of our students

The Anahuac and the CNDH bolster the UN Sustainable Development Goals