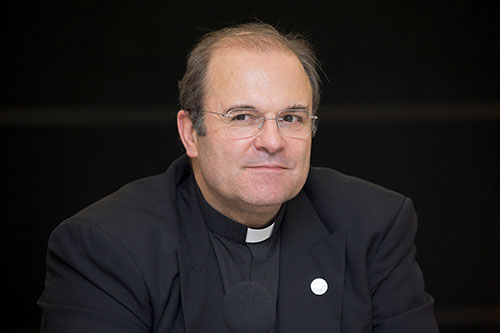 Mr. Cipriano Sánchez García, L.C., is of Spanish and Mexican nationality, he was born in Talavera de la Reina, Spain in the year 1958. He is a member of the Legion of Christ since 1975 and was ordained a priest in Rome in 1988.

Within the Legion of Christ and Regnum Christi, he has held different positions. He was Prefect of studies at the Centro Vocacional Legionarios in Ontaneda, Spain, from 1979 to 1983; Vice President of the Centro Vocacional de los Legionarios de Cristo in Moncada, Valencia from 1988 to 1989; member of the Comité Doctrinal Territorial de México de la Legíon between 1991 and 2007; he is a member of the Comisión de Estudios y Formación Permanente de los Legionarios since 2014; assistant of the prefecture of Studies of the Estudios del Territorio de México from 1992 to 2009; Director of adult sections of Regnum Christi in southern Mexico City from 1990 to 2004, and Director of the ladies section from 2004 to 2007 in the western part of Mexico City.

Also, Fr. Cipriano Sánchez has deep knowledge of the subject of the family, which has led him to occupy various responsibilities. He is Director of the CENYELIZTLI, A.C., Unidos por la Familia foundation, dedicated to promoting the family with a social responsibility orientation, since 2006.

In 2009, he was the organizer of the World Meeting of Families in Mexico City and hosted the weekly radio program Hombre nuevo edificando a la familia, in 1030 AM, from 2004 to 2013, from Grupo Radio Centro. In addition, he has been a collaborator in religious and values subjects in different programs in Televisión Azteca since 1999.

Fr. Cipriano Sánchez publishes a blog about values in ciprianosanchez.blogspot.com and maintains a strong presence in social networks.

He speaks French, Italian, English, and Latin and knows Biblical Greek and Portuguese.